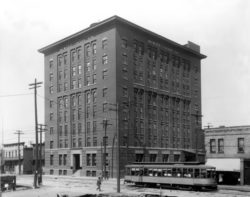 The DeWitt-Seitz Marketplace stands at the center of Duluth’s waterfront in the heart of Canal Park. Architect John Wangenstein designed the building in the mainstream of the commercial style, developed first by Louis Sullivan. Built in 1909 for the DeWitt-Seitz Co., a furniture jobber and mattress manufacturer, this eight story building has undergone several transformations over the years. At its start the building functioned primarily as a furniture warehouse. Changes during the depression and after WW II led to the decline of the jobber’s middleman role and with it the DeWitt-Seitz furniture business. The company became almost exclusively, a manufacturer and distributor of mattresses and related products.

In 1961 Sam F. Atkins bought out the DeWitt-Seitz Co. and changed the name of the company to The Happy Sleeper. Happy was the nickname of Sam F. oldest son. A mattress showroom was opened on the first floor, a new marketing concept at the time, and sold mattresses to the public until 1983 when the company, because of demand, built a factory in Eau Claire WI.

That same year, son Sam E. Atkins took over management of the building. He immediately set about transforming the DeWitt-Seitz from industrial warehouse building to the Marketplace and offices it is today. The Marketplace opened in May 1985 with The Blue Heron Trading Company located in the DeWitt-Seitz Co. office space. Their demonstration kitchen was the president’s office, windows were removed and a counter top installed. The company walk-in safe is in the southern-most corner. In June, the Art Dock opened on the first floor and in the fall of 1985, J-Skylark was the first store to open on the second floor. These three original business are thriving in the DeWitt-Seitz Marketplace today. 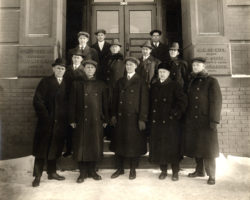 In 1987, Sam E. Atkins purchased the old Halverson Tree property. This includes: the building (built 1954) next to the original DeWitt-Seitz, the building (built 1886) at 369 Canal Park Drive, they are connected on the second and third floor with a bridge over the alley and the parking lot. Because the floor levels in the two adjacent buildings are different it was necessary to install a ramp to adjust between them. Sam E remodeled all three buildings with locally owned retail stores in the basement , first and second floors and office space on the third and fourth floor.

In 2000, Bill Rogers purchased the buildings. With a similar vision, Bill has been developing the upper floors and has completed offices on the fifth and sixth floor. Restoration of the exterior was completed in 2007. This Duluth landmark, is included on the National Register of Historic Places. There are 11 locally owned, wonderfully different shops and restaurants on the lower three floors.

Part of this article was taken from “DeWitt-Seitz Marketplace and The Canal Park Area – Self-Guided Tour” prepared by Mike Agnew in 1988.